Istanbul – Turkey | The most important tourist places and parks

Markets in Istanbul: Istanbul has been known since ancient times as Constantinople, Byzantium, Astana and Islambol.

It is the largest tourist city in Turkey and the second largest in the world, with about 13 million inhabitants.

Places of tourism in historical Istanbul were added to the list of UNESCO World Heritage Sites in 1985.

Tourist places and parks in Istanbul

The Bosphorus Bridge spans across the Bosphorus Strait between Ortakoy district, on the European side, and Beylerbeyi, on Istanbul’s Asian side, offering the chance for visitors to cross between the two continents that make up this unique and extensive city. The famous bridge is approximately 1.5 kilometres wide and 165 meters high with an underneath clearance of 64 meters which allows for larger ships to pass below. Construction of the Bosphorus Bridge began in 1970, under the command of Prime Minister Adnan Menderes who first proposed the idea in 1957. Three years later the building works were completed and the bridge was declared open on October 29th 1973, exactly 50 years after Turkey became an independent Republic.

The Princes’ Islands are a cluster of 9 islands southeast of Istanbul in the Sea of Marmara. Mainly car-free, the islands are known for their horse-drawn carriages (phaetons). At the highest point of Büyükada, the largest island, the 6th-century Hagia Yorgi Church has panoramic views. Nearby are the pine forests of Dil Burnu National Park. The Museum of the Princes’ Islands has exhibits on the islands’ history.

The Çemberlitaş Hamamı was commissioned by Nurbanu Sultan, the head of Istanbul’s imperial harem after the death of her second husband Selim II. After his death, her first son ascended to the throne and she held the title “Mother of the Sultan”. She was responsible for guarding the royal family and had the highest power to exercise administrative control over the imperial harem. In order to manage them she was given a stipend that increased with the number of the women in the harem. She used it to develop several charitable endowments which included the Çemberlitaş Hamamı.

Miniatürk is a miniature park situated at the north-eastern shore of Golden Horn in Istanbul, Turkey. It was opened May 2, 2003. Miniatürk covers a total area of 60,000 square metres (650,000 sq ft). It is one of the world’s largest miniature parks with its 15,000 m2 (160,000 sq ft) model area. The park contains 135 models in 1:25 scale.[3] It contains structures from in and around Turkey, as well as interpretations of historic structures.

The İsfanbul (formerly Vialand [2]) is a 60 hectare leisure complex in Istanbul in the Eyüp district, which consists of a shopping center, a concert and entertainment area, an adventure museum, a hotel and the first amusement and amusement park. The Vialand was officially opened and inaugurated on Sunday, May 26, 2013 in the presence of the Turkish Prime Minister Recep Tayyip Erdoğan. 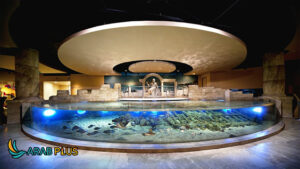 Istanbul Aquarium (Istanbul Akvaryum) is a public aquarium in Istanbul, Turkey. It opened its doors in April 2011, is an official member of World Association of Zoos and Aquariums (WAZA). The site is 5 km from Atatürk International Airport, near the motorway and railway transportation systems in Florya, which is at the southwest coast of Istanbul.

Istanbul Aquarium holds a leading position among worldwide aquariums thanks to its volume, variety of fish species, and the activities on travel routes. Visitors follow a geographical route that includes 16 themes and 1 rainforest going from the Black Sea towards the Pacific. The aquarium was designed by public aquarium design consultants OCEAN Projects.

The aquarists at Istanbul Aquarium work to feed, clean and check the medical and physical conditions of the creatures according to the quarantine protocol set by the aquarium management. To allow all living creatures in the Aquarium continue to live in the conditions as nearest as possible to those of their habitat

Gülhane Park (Turkish: Gülhane Parkı Gulkhāna) is a historical urban park in the Eminönü district of Istanbul, Turkey; it is adjacent to and on the grounds of the Topkapı Palace. The south entrance of the park sports one of the larger gates of the palace. It is the oldest and one of the most expansive public parks in Istanbul.

The Emirgan Park (Turkish: Emirgan Korusu or rarely Emirgan Parkı) is a historical urban park located at the Emirgan neighbourhood in the Sarıyer district of Istanbul, Turkey, on the European coast of the Bosphorus.

It is one of the largest public parks in Istanbul.

Belgrad Forest (Turkish: Belgrad Ormanı) is a mixed deciduous forest lying adjacent to Istanbul, Turkey. It is named after the thousands of Serbs who were deported from the city of Belgrade in 1521 when it fell to the Ottomans. Geographically, the forest is located at the easternmost point of the Thracian Peninsula. Forest terrain is divided between Sarıyer and Eyüp districts. Several historical reservoirs lie within the forest.

Istanbul – Turkey | The most important mosques